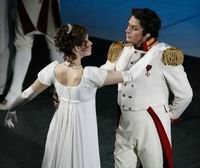 Works of domestic musical dramatic art firmly established in the repertoire: at first there were operas vaudevilles and ballets-variety entertainments based on folk melodies and stories, and later - full-length operas, the best oI which was "Askold s Grave" by Alexei Verstovsky.

Beginning from 1840-s, operas by Wolvgang Mozart, Joaccino Rossini, Gaetano Donizetti, Vincenzo Bellini, Daniel Auber, and others start to appear in the repertoire.

Opera productions of Mikhail Glinka, the founder of Russian classical music, became the most important event in the history of the Bolshoi Theater. Ao stagin: "Ivan Sussanin" in 1842 and "Ruslan and Ludmila" in 1846 the Bolshoi Theater started to create national classical repertoire.

In March 1853, a destructive fire failed to exterminate only the external walls of the theater and its columned front facade. The edifice xi.as restored and slightly reconstructed by the architect Albert Kavos and was opened in 1856. In this appearance, my minor alterations, it exists up to now.


The great significance to the history of the theater was provided by opera and ballet legacy of the great Russian composer Piotr Chaikovsky. His operas "Eugene Onegin", "The Queen of Spades", "The Cherevichki", "Maxepa", "Iolanta", ballets "The Swan Lake", "The Sleeping Beauty" produced in 1870's - 1890's and later - the ballet "Nutcracker" are placed on golden record of the repertoire. In 80's and 90's of the XIX century, works of composers from "The Mighty Group" - "Boris Godunov" by Modest Mussorgsky, "Sadko" and "The Snow Maiden" by Nikolai Rimsky-Korsakov, "The Prince Igor" by Alexander Borodin- were produced on the stage of the Bolshoi Theater. The history of the Bolshoi Theater numbers many distinguished singers who were passing traditions of Russian vocal school and actor's mastery from generation to generation.

The history of the Bolshoi Theater numbers many distinguished singers who were passing traditions of Russian vocal school and actor's mastery from generation to generation.

The real golden age of Russian vocal-execution school set in at the beginning of the XX th century and was connected with coming to the Bolshoi Theater of Leonid Sobinov, Antonina Nezhdanova, Feodor Shaliapin. 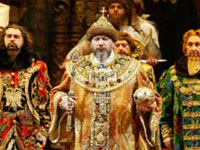 Creative work of these great actors placed Russian vocal-dramatic art among the best in the world.

Traditions of national Russian ballet started to form on the Bolshoi Theater stage as far back as the beginning of the XIX-th century and were connected with activities ofbaIler-master Adam Glushkovsky, later - with ballet-dancers Ekaterina Sankovskaya, Nadezhda Bogdanova, Praskovia Lebedeva, on the eve and at the beginning of the XX th century - with Liubov Roslavleva, Adelaida Jury, Ekatenna Gueltser, Yassili Tikhomirov, ballet-master Alexander Gorsky.

After the year of 1917, works of Soviet composers - the operas "The Still Don-River" and "The Upturned Virgin Soil" by Ivan Dzerzhinsky, the ballet "The Red Poppy" by Reingold Glier - ' were produced on the stage of the Bolshoi Theater together with the best works of Russian and foreign classical composers. 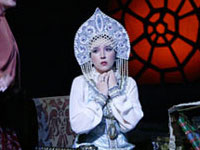 The operas "The Decembrists" by Juri Shaporin, "The War and the Peace", "Semion Kotko", "The Gambler" by Sergei Prokofiev, "The Optimistic Tragedy" by Alexander Kholminov, "The October" by Vano Muradeli, "The Unknown Soldier" and "Quiet Are the Dawns Here" by Kirill Molchanov, "The Stealing of the Moon" by Otar Taktakishvili, "The Dead Souls" by Rodion Schedrin, the ballets "Romeo and Juliette", "The Cinderella", "Ivan the Terrible", "The Stone Flower" by Sergei Prokofiev, "Spartacus" by Aram Khachaturyan, "Assel" by Vladimir Vlassov, "The Legend of Love" by Arif Melikov, "Anna Karenina", "The Sea-Gull", "The Lady with a Doggy" by Rodion Schedrin, "The Hussar Ballad" by Tikhon Khrennikov, "Aniuta" by Valeri Gavrilin are brilliant productions of the Bolshoi Theatre in 1950s - 1980s.